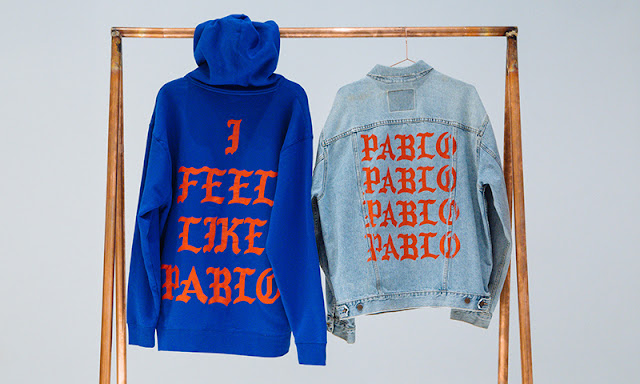 Blackletter fonts first came onto the scene back when SS16 collections were first debuted by brands such as Gucci and Vetements. From there the typeface has gone from strength to strength. Referred to as Old English, it has become the go-to for brands - both high end and high street.

The style may be as popular as ever but it's nothing new. Used within gothic subcultures and motifs within streetwear and gangs for years. Cali Thornhill Dewitt, the artist behind the ridiculously popular The Life of Pablo tour merchandise by Kanye West, credits her inspiration for the design down to memorial sweatshirts from Southern California's Latino community, "I think it's important for people to know that this is something I saw Hispanic gang members wearing," Dewitt told SSENSE, "people would make the t-shirts in LA at the swap meet, for very cheap. It was most often a memorial for someone who died."

The Pablo merch took the font to a whole new level. Producing more and more garments, with new variations and colour palettes - the more merch there was, the more popular it became. High street retailers, caught onto this global phenomenon and started to produce their own versions. And it wasn't just retailers that saw the demand - other artists, such as Rihanna, Justin Bieber and Travis Scott have also incorporated the style into their tour merchandise. Bieber's became so popular that it can now be found on sale over at ASOS.

It's a unique trend that has many many influences, but one thing we're not sure about is where could this trend go? It's one that isn't for everyone and one that probably won't be adopted by many - only those who recognise the trend or type - making the future of the trend, some what uncertain.